In 1833, following his invention of a machine to cut watch pinions from steel,Antoine LeCoultre (1803-1881) founded a small watchmaking workshop in Le Sentier, where he honed his horological skills to create high-quality time pieces. In 1844, he invented the world’s most precise measuring instrument at the time, the Millionomètre, and in 1847 he created a keyless system to rewind and set watches. Four years later, he was awarded a gold medal for his work on timepiece precision and Mechanization at the first Universal Exhibition in London. 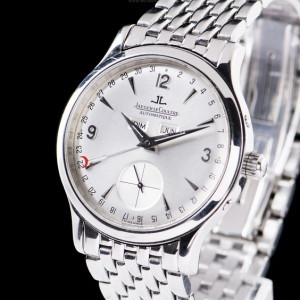 In 1866, at a time when watchmaking skills were divided up among hundreds of small workshops, Antoine and his son, Elie LeCoultre (1842-1917), established the Vallée de Joux’s first full-fledged manufacture, LeCoultre & Cie., pooling their employees’ expertise under one roof. Under this set-up, they developed in 1870 the first partially mechanized production processes for complicated movements.

By the same year, the Manufacture employed 500 people and was known as the “Grande Maison of the Vallée de Joux”, and by 1900, it had created over 350 different calibres, of which 128 were equipped with chronograph functions and 99 with repeater mechanisms. From 1902 and for the next 30 years, LeCoultre & Cie. produced most of the movement blanks for Patek Philippe of Geneva.

In 1903, Paris-based watchmaker to the French Navy, Edmond Jaeger, challenged Swiss manufacturers to develop and produce the ultra-thin movements that he had invented.
Jacques-David LeCoultre, Antoine’s grandson who was responsible for production at LeCoultre & Cie., accepted the challenge, giving rise to a collection of ultra-thin pocket watches, including the thinnest in the world in 1907, equipped with the LeCoultre Calibre 145. The same year, French jeweller Cartier, one of Jaeger’s clients, signed a contract with the Parisian watchmaker under which all Jaeger movements for a period of fifteen years would be exclusive to Cartier. The movements were produced by LeCoultre.[ Edmond Jaeger also acquired the patent for the atmospherically driven clock Atmos from its inventor Jean-Léon Reutter and licensed it to LeCoultre from 1936 for France, and in 1937 for Switzerland.

The collaboration between Jaeger and LeCoultre led to the company being officially renamed Jaeger-LeCoultre in 1937. However, from 1932 to approximately 1985, due to the Smoot Hawley Tariff Act, watches were cased in locally produced cases in North America and sold under the name LeCoultre bei the company Vacheron-LeCoultre, a subsidiary of Longines-Wittnauer, with slightly different case designs. After 1985, Jaeger-LeCoultre was adopted uniformly worldwide. According to factory records, the last movement to be used in an American LeCoultre watch was shipped out of Le Sentier in 1976.
Since Jaeger-LeCoultre’s founding, the company has produced over 1,242 different calibres, registered approximately 400 patents and created hundreds of inventions.

Invented by Antoine LeCoultre in 1844, the Millionomètre was the first instrument in history capable of measuring the micron, allowing for the precise manufacture of watch parts. The invention was never patented, as no such system existed in Switzerland at the time. However, its unique composition was kept a closely guarded secret, used by the company for more than fifty years. It was presented at the Universal Exhibition in Paris in 1900.
In 1847, Antoine invented a keyless watch, the second simple and reliable winding and time-setting system to do without a key after Patek Philippe’s version of 1845.[ Instead, it relied on a small push-piece that activated a lever to change over from one function to another Again, the invention was not patented, allowing other watchmakers to quickly implement the system.

In 1907, the LeCoultre Calibre 145 set the record for the world’s thinnest movement at 1.38 mm thick, appearing in pocket watches that remain to this day the thinnest in their category. From 1907 until the 1960s, the movement was produced in some 400 copies.

In 1866, for the first time in watchmaking history, LeCoultre & Cie. began to manufacture calibres with small complications in small series, and in 1891 combined the chronograph and minute repeater complications into a double complication calibre.

This subsequently led in the mid-1890s to the production of grandes complications, or watches comprising at least three classic horological complications, such as a perpetual calendar, chronograph and minute repeater.
In 2004, the Manufacture created the Gyrotourbillon I, its first grande complication wristwatch, featuring a tourbillon gravitating on two axes, along with a perpetual calendar with double retrograde indicators and a running equation of time. In 2006, it released the Reverso grande complication à triptyque, the first watch in history to be equipped with three dials driven by a single movement, and in 2009 the company produced one of the world’s most complicated wristwatches, the Hybris Mechanica à Grande Sonnerie with 26 complications.
Sourse: Wikipedia

No other information about this author.