Baume & Mercier was founded as “Frères Baume” in 1830 by brothers Louis-Victor and Célestin Baume, who opened the watch dealership in Les Bois, a village in the Swiss Jura. The Swiss watch manufacturer expanded internationally by establishing a branch in London in 1921 under the name “Baume Brothers”, which led to expansion throughout the British Empire. By the late 19th century, the company had an established international reputation, and its timepieces had set accuracy records and won a number of timekeeping competitions. 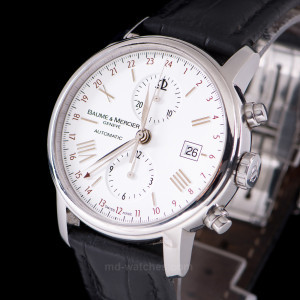 In 1918, company director William Baume partnered with Paul Mercier to found “Baume & Mercier” in Geneva. The firm became specialized in manufacturing wristwatches, particularly unconventional “shaped” models that did not possess the traditional round form. In 1919, Baume & Mercier was awarded the Geneva Seal, the highest international distinction of the time for watchmaking excellence.

During the “Roaring Twenties”, the brand embraced women’s emancipation. In the 1940s, Baume & Mercier launched a number of modern ladies’ watch collections, most notably the Marquise.

In the 1970s, Baume & Mercier introduced shaped timepieces such as the Galaxie and Stardust models. In 1973, Baume & Mercier presented the Riviera, one of the world’s first steel sports watches. In 1988, the Swiss watchmaker joined the Richemont group.

No other information about this author.